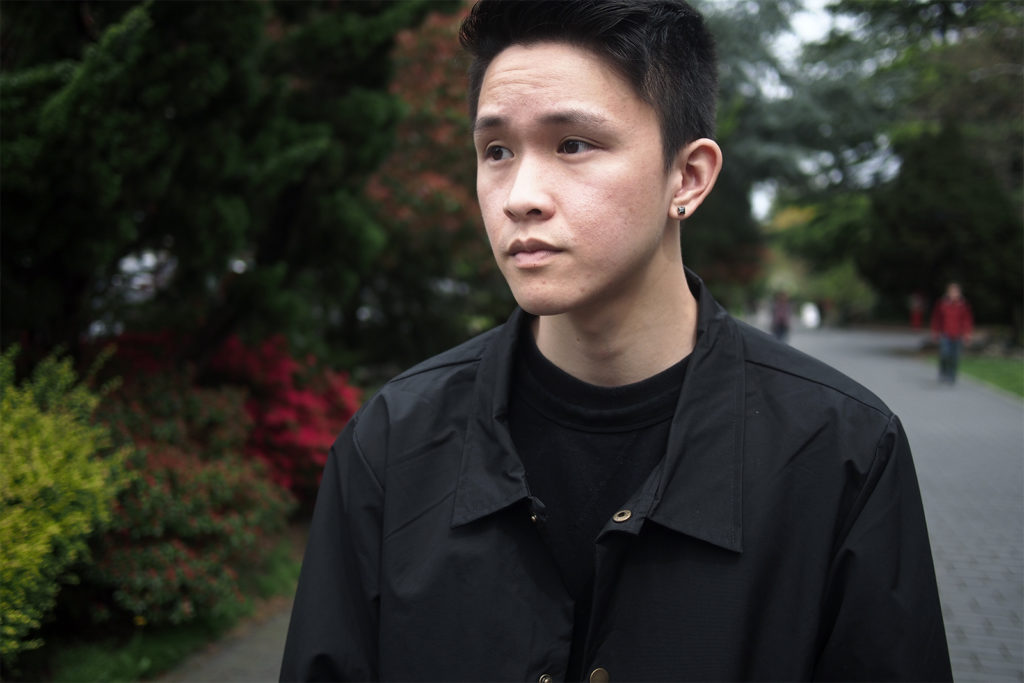 It’s the last Monday of his final semester of law school and Troy Osaki is at work in the Seattle University student center. He’s not cramming for finals — he’s rolling out letters and gluing together a sign to take to a King County Council meeting later that afternoon.

The sign reads, “SUPPORT YOUTH NOT DETENTION” in black and red. He’s advocating for an ordinance that would ensure access to legal counsel for detained youth. Even on the eve of his transition from student to law school graduate, the 24-year-old Osaki is intent on making change within his community.

Osaki is a Seattle native. He still lives in his childhood neighborhood of Montlake, a few miles north of his university, and has only ever gone to school in the city. He has always had a sense of service which pushed him toward law.

But a poetry unit in Osaki’s sophomore year of high school introduced him to Seattle’s poetry scene, including Cafe Allegro’s open mic nights and the literary arts organization Youth Speaks Seattle. Poetry became his way to process the death of his Garfield High classmate, who was shot just outside of school. The 15-year-old was one of six teenagers shot and killed in Seattle in 2008. They weren’t close friends, but Osaki had known him since middle school.

Someone Osaki knew personally had been murdered and it left him with a lot of questions. Poetry was how he looked for answers.

“I got to learn that poetry can be used as a tool to learn and process things. From there it’s just developed into something that I need to do and think about all the time,” says Osaki.

In the present day,
I am taught how non-violence
is the appropriate response
to oppression.

Osaki glues the final letters onto his signboard before realizing he has just 10 minutes until the meeting begins. He decides to catch a Lyft with his law clinic partner, scrapping his plan to drive to Seattle’s Chinatown-International District and walk from there.

Today, Osaki’s poetry reflects the influence of his Asian American identity and his family’s histories. He was particularly affected by stories his Japanese American grandmother shared from her experience in camps around the US during World War II. She was just 11 when her family was separated and imprisoned. Osaki refers to the US government’s actions as incarceration, rather than the oft-used term “internment,” and the camps as concentration camps.

“They said it was for Japanese American safety,” he says, “but then the barbed wire was keeping people in and not out.”

The injustices endured by his family gave him an understanding that the legal system was just a tool, one that would be ineffective without his poetry and activism.

How collaborating with the elite
will guarantee my freedom
as if requesting to not be invaded
granted my ancestors safe passage from being displaced.

Osaki keeps the sign folded as he passes through the county building’s security checkpoint. In the council chambers, he silently greets the group of youth justice advocates who organized the day’s action. One by one, they each testify in favor of providing legal counsel to interrogated youth. No one speaks in opposition.

Osaki works with young people in Seattle’s juvenile court and detention system in legal clinics and to teach storytelling. He is also among those opposing the expansion of King County’s new juvenile justice center, slated to be built just south of Seattle University at a cost of $210 million. This expansion is being planned despite the county’s reports of a 16 percent drop in juvenile incarcerations.

“A lot of youth detained here are disproportionately people of color,” says Osaki. “The folks I’ve worked with have also been from poorer communities, or communities lacking in a lot of resources.”

“Criminalizing more young folks and increasing the police state — why is that our solution to violence?” Osaki asks. “Resources such as mentorship, youth programs or youth employment can be a better solution than making a nicer detention center for young folks.”

My blood is the surviving offspring of diaspora.
I will not plastic wrap myself in peaceful protest
for you to co-opt as progress.

Once the county council moves on to the next agenda item, Osaki hurriedly leaves the room. He still has assignments to complete and final exams to study for. He hops on another Lyft back to law school.

After the bar exam, he’s planning a trip with his girlfriend to the Philippines and Japan.

“It’ll be our first times in the homeland. I’m really appreciative of that and don’t know what to expect… That’ll be really life changing.” He pauses and smiles. “I’m going home.”

The King County Council went on to give its unanimous approval to the juvenile justice legislation. Though the expansion of the youth jail is likely to proceed, detained youth have been afforded at least one more legal protection. A tiny legislative victory as Osaki moves on.

“I’m still carving out whatever path I’m about to take. I feel like both poetry and law will be in there some way,” Osaki says. “If I love something, it will be a part of me no matter what.”

I will not ask the system politely to dismantle itself.
The ocean has always been armed resistance.
I will submerge the state beneath our tides
until it breaks under pressure,
before I ever bow in obedience.